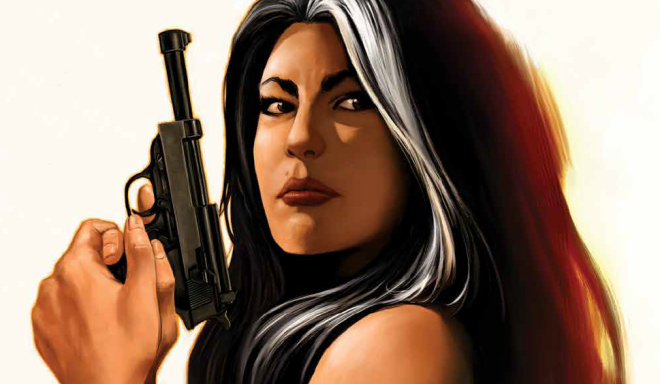 Wired had a review a while back about Velvet by Ed Brubaker, which looks worth getting.

In the opening issue of the comic book Velvet, the secretary to the director of an elite British spy agency decides to go digging into the mysterious death of a secret agent. This, she learns, is a mistake, and soon enough she finds herself standing over a dead body, and framed for murder. “This is as bad as it gets, secretary,” says one of the armed men who bursts in to arrest her. “No,” she answers, “it isn’t.” Seconds later, every secret agent in the room is writhing on the floor, and she’s leaping out the window in a stealth suit.

Turns out this isn’t a story about Moneypenny, the secretary waiting for James Bond behind a desk at MI6. It’s a story that asks, what if a 40-something secretary was secretly James Bond all along?

I like this idea. It’s a bit different to the norm, and provides an interesting angle on the traditional spy story:

“I loved the idea of flipping the typical male-oriented spy story, and doing one about a woman who was also a mature, middle-aged woman,” says Brubaker. He saw the character’s age as fundamental to the story; it helped cement her as mature, seasoned rather than a vulnerable young woman-in-danger, and it allowed her to have a deeper, richer history as a spy. “In the espionage field, it totally makes sense that someone could have a secret history; they could have a job for 20 years that turns out to be a front, basically,” says Brubaker. “But it has to be someone who’s lived a real life.”

It seems there’s a lot of pushback for this kind of character, either because of her age or her sex or both:

When he started pitching the concept as a TV pilot, however, Velvet’s age turned out to be more controversial than expected. “The notes that we got from everybody were that she needed to be 25, and an agent-in-training learning from the cool male secret agent. I was just like ‘OK, this is… just appalling to me,’” Rather than a character that had lived a real life, they wanted a woman 20 years younger, stripped of Velvet’s expertise and maturity. “Imagine Taken, if Liam Neeson’s character were 30,” he adds. “It’s just not the same movie.”

I think I’ll give this a go next time I have any money to buy books.