My 1914 DMs recently developed some separation issues, so I decided to do some DIY repair work this evening before the problem got any worse.

The problem started with a small gap opening between the sole and the boot upper, which started to get worse lengthways along the boot. I wear my boots pretty much every day and they were not only lacking the ‘bounce’ but were squeaking in wet weather. I’d heard of the ‘old hot knife trick’ to fix this, but I couldn’t find any actual instructions beyond the idea that you slip a hot knife blade between the two halves and Bob’s your Auntie’s live in lover. So, having watched a video of how the boots are made in the factory, which demonstrated how the soles are heat welded to the uppers, I thought I might as well give it a lash and see how it goes. It couldn’t make things any worse!

After a little trial and error, I’ve done the following. It’s simple enough and I’ll find out over the next while how long it lasts!

First off, choose an expendable blade. It should be thin, and you need to be able to hold it when it’s hot. I used an old Swiss Army knife I had lying around. 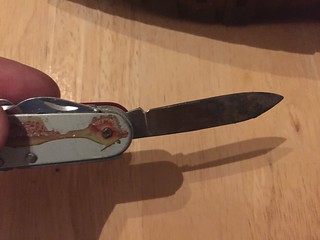 Step two, get it hot. It needs to be very hot, so I held it in a gas hob flame for a few minutes, until it starts turning cherry red. 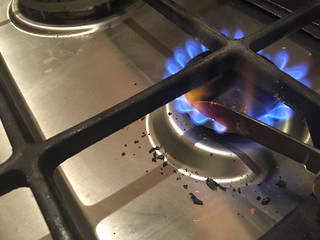 Place your boot side up and place your forefinger and thumb ready to press the two halves together. Carefully slide the blade into the gap between the two and press closed with forefinger and thumb and slide the blade out. There will be a waft of vapourised sole up your nose so make sure you’re in a ventilated area. The weld will cool and stick quite quickly. You may need to repeat the heating and pressing process a few times, depending on how long the separation gap is. 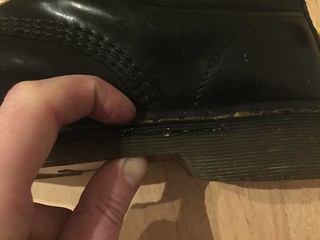 A word of warning, you’re melting the sole to the upper, so your blade is hot enough to damage the sole badly if you’re not careful. If you hold it too long in one place or press it into the sole by accident it’ll melt a gap or slice into the sole like butter (well, not quite that easy but close enough!). And obviously you’d seriously burn yourself if you touch off the blade.

So that’s it, we shall see how long the new weld lasts!