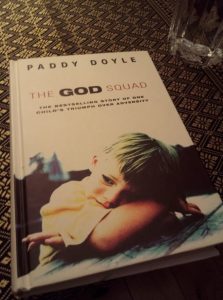 The God Squad is the remarkable true story of a survivor, told with an extraordinary lack of bitterness for one so shockingly and shamefully treated. In Paddy Doyle’s own words: ‘It is about a society’s abdication of responsibility to a child. The fact that I was that child, and that the book is about my life, is largely irrelevant. The probability is that there were, and still are, thousands of ‘me’s.’

While strolling through Blackrock Market a while back, my partner in crime picked this up for me. Highly readable and fascinating story of life in the industrial schools of Ireland, written in 1989 by Paddy Doyle. The casual cruelty meted out to a young child is terrible, yet it continued year after year, for decades. It reflects an Ireland that is both within living memory yet feels far away. Particularly worth reading in the context of the coming Papal visit, an organisation that continues to cover up it’s past and deny justice to it’s victims. The harm doesn’t cease when the laundries close, the schools shut, or the abuser dies – it can affect the next generation too.