The week that contained years

Lenin once said that “There are decades where nothing happens; and there are weeks where decades happen.”

This has been one of those weeks. I don’t think I’ve ever experienced such a sense of compressed events; news breaking like waves. The fallout from this week will last years. 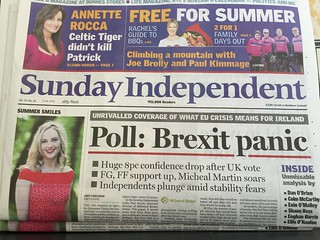 Politically, most of the action, or perhaps inaction, has been in the Westminster parliament (and I feel a strong need to  differentiate between components of the UK now given that the Scottish First Minister Nicola Sturgeon is playing a blinder).

In some ways the real decisions are being taken outside of Westminster. The U.K. Government has disappeared into a Tory leadership fight that could shatter the party in two. The only decision they’ve taken is not to invoke Article 50 yet. 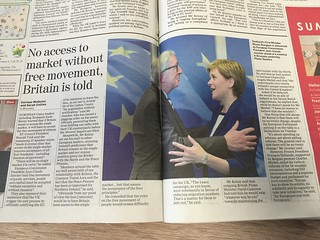 As for the pretenders to the throne, Boris Johnson, after staring the future in the face, suddenly remembered that his number one priority is Boris and quit. Allegedly he was stabbed in the back by Gove, but I suspect he was looking for an excuse to go since he won the referendum he didn’t want to win. Gove has thrown his hat in the ring, in a surprise move given that he always denied any aspirations in that direction. Meanwhile, Theresa May, who wants to drop the Human Rights act, sounds like she’d use EU citizens in the UK as some sort of bargaining chip, no guarantees until she negotiates with the EU. A fair point but hardly helpful to the rising number of people facing rascist abuse on a daily basis. Now the race seems to be how right wing the Tories can go to prevent UKIP eating their lunch. The (disgraced) Liam Fox (those two words are indelibly associated in my head now) has also put himself forward.

So where’s the opposition been? Labour, amazingly enough and at a time like this and all, has suffered a leadership challenge, and nobody really seems to know what is going on at all. Sort answer here is that while entertaining, there’s no official opposition in the UK right now.

There’s been a special session of the EU parliament on Monday, where Farage was roasted and Alyn Smith gave a rousing speech to standing ovation that exhorted Europe to stand by Scotland (which voted remain). Somewhat ominously, Marine Le Pen made great mileage out of the referendum result. Europe is under pressure like never before – suddenly the European project needs to defend itself, which could be the making of it. It’s had a somewhat easy ride since the fall of the Iron Curtain.

In a surprise turn of events, Farage has resigned from leadership of UKIP. I don’t think there’s anyone of substance left to resign from something anymore in the UK.

Most of Europe is either quietly trying to work out what the hell is going to happen in the future, or strongly suggesting that the UK ‘press the button’ on article 50 and get on with it. 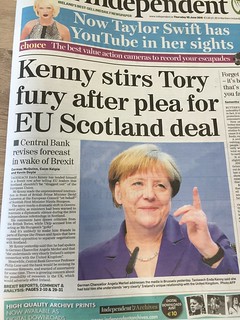 during the first Scottish independence referendum), an Taoiseach Enda Kenny spoke on behalf of Nicola Sturgeon at the full 28 member heads of state summit this week, the first since Brexit. This move drew fire from the Spanish, wary of any Catalonian moves in a similar direction to Scotland, and from the Scottish and English Tories (and UKIP, as you’d expect). We are probably aiming to capitalise on the goodwill Scotland has in Europe just now, but traditional Irish Foreign policy has been to support other small nations. Significantly, this summit was followed by an informal meeting of the 27, the UK is already being left out in the cold.

The impact on Northern Ireland, the peace process, Scotland, Gibraltar and so on seems to have been forgotten or ignored by the mainstream in the UK. England is turning in on itself, we may yet see the breakup of the U.K. Perhaps this is the end stage of the long retreat from empire – after the First World War the Empire shrank, up to the Suez Crisis in ’56, when the UK finally had it spelled out to them that they were no longer a Great Power, able to dictate events on the world stage. I think this is the greatest existential crisis to hit them since. The rump of empire was finally lost in 1999 with the return of Hong Kong to China. Now, if Scotland leaves, England will shrink back to being England once more, for the first time in the 309 years since the Union with Scotland in 1707.