Toying around with ideas of what Scotland could do to stay in the EU, while also wondering what will happen to Northern Ireland which also voted to ‘remain’, a friend and I ended up considering if the twitter favourite ‘Union of Craic’ would actually work.

The idea is that Scotland goes ahead and runs a second indyref, and wins it. The issue then is how does Scotland get into the EU? Spain will be almost guaranteed to veto any quick join options, if Madrid doesn’t veto the application altogether. This is to avoid the Catalan problem. So, searching for another option, my friend reminded me that there is another more interesting precedent – East Germany.

The two Germany’s unified and stayed in the EU. So, how about a union, or more likely a loose federation of the Republic of Ireland and Scotland. By joining Ireland, Scotland could stay in the EU under our membership. It’d make sense for Northern Ireland to join in too, it would get to stay in the EU and the border would stay down.

The price would be NI and Scotland joining the Euro, and I’m sure there’s a lot more hurdles. But as a daydream, it’s a fun idea to consider.

The Union of Craic, eh? 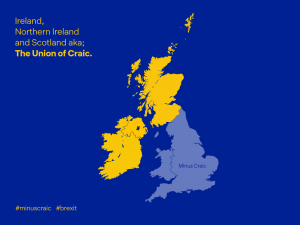