That good news didn’t last – ‘It will be back to car city’ reports the Journal.

Minister of State for the OPW, Patrick O’Donovan, said the decision over the gates was made after discussing issues like a growth of traffic in the surrounding areas over the past few weeks.

“The volume of traffic built up in adjoining areas has gone up a lot,” he said, adding that there have been an “awful lot of traffic jams” on the western side of the park in particular.

The decision is hoped to help “find out what impact the reopening was going to have” in relation to these recent bouts of traffic.

“Whether we like it or not, for an awful lot of people it’s a commuter route,” he said.

A public consultation on the matter will begin in “the coming weeks”, the Minister of State confirmed. I would love to see the traffic volume reduced in the park, I’m committed to trying to work to see how we do that.

“[The Phoenix Park] is the lungs of Dublin, but unfortunately it has also become an artery,” O’Donovan said.

Is it a park, or a road with some green bits? If it’s a road, it’s obviously not wide enough, if it’s a park, it’s got too many through-routes. It can’t do both, and now it does neither.

I can usually see a stream of little silver slivers on the horizon, landing and taking off from Dublin Airport. Now, the skies are empty and silent. Global air traffic has collapsed:

The tiny yellow aircraft symbols speak volumes. Anyone familiar with the flight-tracking website Flightradar24 knows the scores of miniature aircraft on the interactive world map, swarming all over the globe like insects. Usually it’s fascinating to watch the pulsating traffic patterns and movements between continents, varying according to local times and peak hours.

Currently, a look at global flight activities reveals an eerie picture as the swarms have all but disappeared. Clicking on the plane symbols allows users to identify what is still in the air — it’s mainly cargo aircraft, planes bringing home stranded tourists plus a handful of remaining regular flights.

Exactly 101 years after the world’s first international scheduled air connection in February of 1919, the new coronavirus has almost brought the world air transportation system to a virtual standstill.

The roads are empty too. Although, as everyone is limited to 2km exercise trips, there’s a lot more people out walking, cycling, at all hours. It’s been nice not to have to commute every day, luckily we both work in IT so our jobs are pretty much doable anywhere. It makes the day calmer, it’s something I’d like to continue after all this is over. Why battle into an office every day?

Unsurprisingly enough, and as previously indicated from small scale tests, sitting in a car or other vehicle is the most air-polluted place to be according to new research reported in the Times (“Motorists in ‘poisonous cabin’ alert”).

“If you are stopped in congested traffic with your windows closed, as at traffic lights, then these toxins become highly concentrated,” said Prashant Kumar, professor of environmental engineering at Surrey University. His findings suggest concentrations are often 10 times higher in such cars than on nearby pavements.

Mike Hawes, of the Society of Motor Manufacturers and Traders, said there were no regulations on air quality in vehicles but the UN was overseeing talks to develop a new global standard.

“The industry . . . is investing billions to engineer low-emission technology, from engines and exhausts to cabin filters,” he said. Car makers had made “considerable progress”, with new cars emitting reduced particulates and NOx [oxides of nitrogen].

So not only are you contributing to the problem with your engine, you are also exposing yourself and your passengers to the worst effects of the resulting air pollution.

The internal combustion engine has got to go, packing thousands of them into our streets and roads is no longer an option.

A bit radical but why not? How much air pollution should it be ok for children (and adults) to breath in every day just for a little apparent convenience? Perhaps this is something Dublin should look at too.

“You can’t play politics with people’s lives and people’s health,” said Mr Khan. “Every day action is delayed it means another young person breathing in this toxic air, an older person having breathing problems because of the poor quality of the air and literally people die. “Why can’t we work with schools and councils to have some roads outside schools where cars aren’t allowed to go? Really encourage mums, dads, carers and children to walk to school. It will be safer and you are not breathing in toxic air when playing in the playground.”

The stark reality of the ‘cheating’ on emissions by Volkswagen:

“The researchers estimate that 1,200 people in Europe will die early, each losing as much as a decade of their life, as a result of excess emissions generated,” said the Massachusetts Institute of Technology, which took part in the study.
[..]

The European Environment Agency estimates that more than 400,000 people die prematurely every year due to outdoor air pollution in urban Europe – about half of it from traffic emissions.Volkswagen’s rigged cars emitted NOx at levels that were on average four times the European limit, said the MIT statement.The researchers combined data on Volkswagen emissions, how far and often Germans drive their cars, and pollution-impacting weather phenomena such as wind and rainfall.They produced a map of pollution which they overlaid on population density charts of Europe.With these, they calculated Europeans’ exposure to German-derived excess emissions from the Volkswagen deceit, and their increased risk of premature death.

“It ends up being about a one percent extra risk of dying early in a given year, per microgram per metre cubed of fine particles you’re exposed to,” Barrett explained.
Typically, that means that someone who dies early from air pollution ends up dying about a decade early.
Excess emissions are calculated as the difference between the limits set by European authorities, and actual pollution that took place under the fraud.

So, how much corporate and shareholder profit was gained by killing people? This isn’t cheating, it’s killing fellow humans for profit.

I like to dress the bike festively during Christmas. Lights *and* tinsel this year. 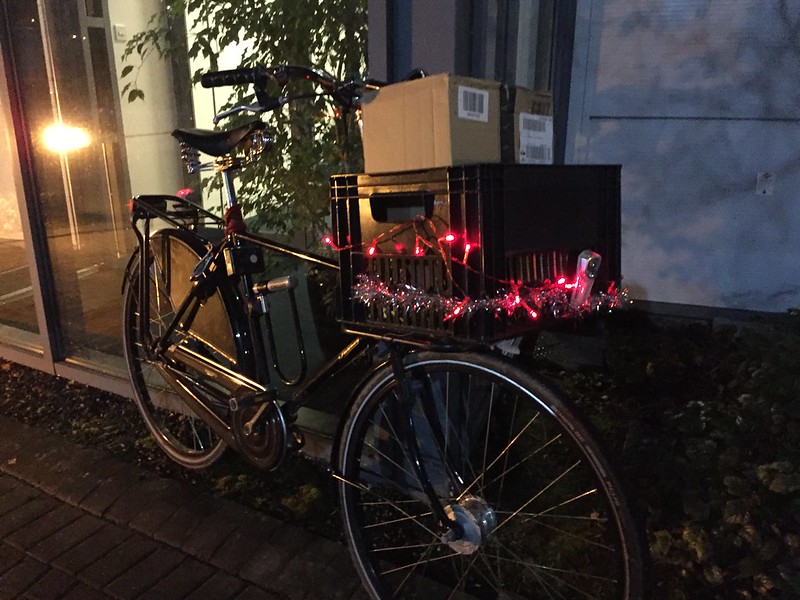 Copenhagenize is pondering where the clean energy to power all the electric cars of the future will come from. More to the point, I think, is the huge amount of resources in materials and energy that are needed to build these cars. Especially the batteries.

Then there are the renewables themselves. As electric car enthusiasts envision it, both electric cars and the renewables propelling them are carbon neutral and fossil fuel-free. Not so. The batteries, both for the cars and for the extensive storage of wind and solar power, are manufactured from mined materials, like lithium, with many toxins and disposal problems. The battery factories, whether in China or Nevada, will not run on wind or solar (unless you divert wind and solar from households at a massive scale). The factories now, and in the future, will run on coal, gas, and oil.

The nanomaterials take massive amounts of energy to produce, and will emit greenhouse gases far more intensive than carbon. There are magnets and rare earth metals. There will be steel, produced from iron. Denmark might produce a “green” electricity surplus on certain days in windy Jutland, but the true carbon footprint is displaced to China, Germany, and other global steel, batter, and car manufacturing centers.Electric cars will continue to have rubber tires – that is, petroleum – as well as plastics, lead, aluminum, and all kinds of chemicals that contribute to more intensive GHGS than carbon. There will be vehicle maintenance including replacement tires and electrical gadgets, and then disposal or recycling. All taking massive amounts of energy and resources – none of which show up in California or Denmark’s GHG budgets.

And they’re still cars. We need less cars in our cities, not more. They can help in the solution, but they’re not a solution in themselves.

Essentially, people like moving around. They have to do so for work and they are keen to do so too for things like shopping and socialising. And, according to the findings, if you give them an opportunity to use the roads more, they will fill them.

The professors even say there is no evidence to support what would seem like the common sense view that if you improve the supply, quality and price of public transport, less people will use their cars.

In short, if you build the roads, the cars will follow.

Good points from John Naughton in the Guardian today about the recent Tesla car auto-pilot crash:

For that kind of discussion to be possible, however, mainstream media will have to change the way they report self-driving cars. Every time a Tesla or a Google car is involved in a crash, by all means report it. But also report all the “human error” crashes that occurred on the same day. It’s not rocket science, just balanced reporting

Unfortunately, rare or unusual events are more newsworthy than the mundane, even when the mundane is death. Road deaths are often sadly treated as background, some sort of par for the course. In the 14 years following the terrorist attacks of 9/11, there were eight crashes on American soil of passenger planes operated by regional, national, or international carriers. The death toll in those crashes totaled 442. That averages out to fewer than three fatalities a month.

The death toll on America’s streets and highways during that same period since 9/11 was more than 400,000 men, women, and children. The traffic death toll in 2015 exceeded 3,000 a month. When it comes to the number of people who die in car wrecks, America experiences the equivalent of four airliner crashes every week.

A normal day on the road, then, is a “quiet catastrophe,” as Ken Kolosh, the statistics chief for the National Safety Council, calls it. He ought to know: He makes his living crafting the annual statistical compendium of every unintentional injury and death in the country.

Car crashes are the leading cause of death for Americans between the ages of 1 and 39. They rank in the top five killers for Americans 65 and under (behind cancer, heart disease, accidental poisoning, and suicide). And the direct economic costs alone—the medical bills and emergency-response costs reflected in taxes and insurance payments—represent a tax of $784 on every man, woman, and child living in the U.S.

The numbers are so huge they are not easily grasped, and so are perhaps best understood by a simple comparison: If U.S. roads were a war zone, they would be the most dangerous battlefield the American military has ever encountered. Seriously: Annual U.S. highway fatalities outnumber the yearly war dead during each Vietnam, Korea, Iraq, Afghanistan, the War of 1812, and the American Revolution. When all of the injuries from car wrecks are also taken into account, one year of American driving is more dangerous than all those wars put together.

The car is the star.

Via: The Absurd Primacy of the Automobile in American Life – The Atlantic