With everyone stuck at home, flour has tended to be in somewhat erratic supply since the lockdown started. Especially strong flour, which I haven’t seen in weeks. Anyway, Tesco are trying to get ahead of the demand curve with these ten kilo bags.

Probably as restaurants and bakeries aren’t buying these sizes there’s a surplus. Good value of you’ve somewhere to store it!

Having already lasted seven weeks, the lockdown also mitigates one of the biggest challenges usually facing sexual health clinicians: it can take up to a month from potential exposure to HIV for current tests to return a definitive result. “If nobody has had sex which has put them at an HIV risk for at least four weeks,” says McOwan, “there will be nobody in this blindspot who might otherwise be missed.”

When taking regular treatment, people who are HIV positive have an undetectable viral load and therefore cannot pass on the infection. New HIV infections had already been dropping nationally, in part because the NHS is increasing public access to pre-exposure prophylaxis (PrEP), a drug taken by HIV-negative people before and after sex that reduces the risk of getting HIV. In 2012, there were an estimated 2,800 new HIV diagnoses among men who have sex with men in the UK. In 2018 the figure was down to 800, a 71% fall.

“If we can now find the remaining people with HIV through testing and put them on treatment,” says McOwan, “we could remove anyone who is infectious from the population with long-lasting effects. We won’t get this two-month window of no sex again.”

Tim Bray, now ex-VP in Amazon, quit his job in protest at the treatment of the warehouse workers:

Amazon is exceptionally well-managed and has demonstrated great skill at spotting opportunities and building repeatable processes for exploiting them. It has a corresponding lack of vision about the human costs of the relentless growth and accumulation of wealth and power. If we don’t like certain things Amazon is doing, we need to put legal guardrails in place to stop those things. We don’t need to invent anything new; a combination of antitrust and living-wage and worker-empowerment legislation, rigorously enforced, offers a clear path forward.

Don’t say it can’t be done, because France is doing it.

Poison · Firing whistleblowers isn’t just a side-effect of macroeconomic forces, nor is it intrinsic to the function of free markets. It’s evidence of a vein of toxicity running through the company culture. I choose neither to serve nor drink that poison. ¶

What about AWS? · Amazon Web Services (the “Cloud Computing” arm of the company), where I worked, is a different story. It treats its workers humanely, strives for work/life balance, struggles to move the diversity needle (and mostly fails, but so does everyone else), and is by and large an ethical organization. I genuinely admire its leadership. ¶

Of course, its workers have power. The average pay is very high, and anyone who’s unhappy can walk across the street and get another job paying the same or better.

Spot a pattern? · At the end of the day, it’s all about power balances. The warehouse workers are weak and getting weaker, what with mass unemployment and (in the US) job-linked health insurance. So they’re gonna get treated like crap, because capitalism. Any plausible solution has to start with increasing their collective strength. ¶

Worth reading in full.

Trump spelled out a potentially brutal approach to kickstarting the world’s biggest economy. “We have to be warriors,” Trump told Fox News when asked if Americans should expect additional deaths as the country looks to reopen. “We can’t keep our country closed down for years.”

The president added: “Hopefully that won’t be the case … but it could very well be the case.” 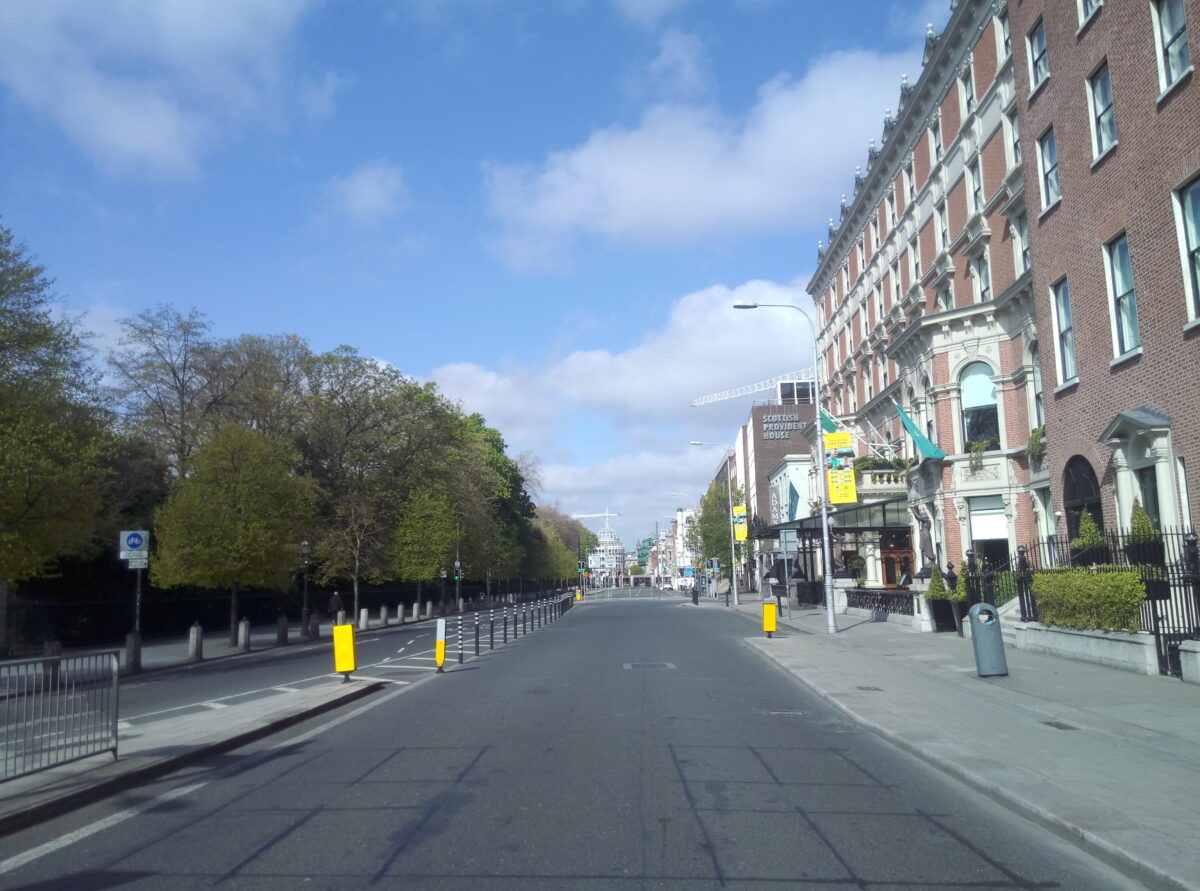 The iconic Bewley’s is to close again (it’s had a rocky 21st century so far). The current owners point at the high rent among other reasons.

In a note to staff, the cafe’s managing director Cól Campbell, a son of Paddy Campbell, outlined the impact of the lockdown on the business and highlighted the added costs of social distancing measures, once cafes and restaurants are allowed to reopen on June 29th.

He also cited its €1.5 million annual rent as a reason behind the decision, saying that a request for a rent reduction had not been granted. The building is leased from RGRE Grafton Limited, which is controlled by property developer Johnny Ronan. The rent amounts to about 30 per cent of the cafe’s sales.

Seems to me that other than owning a bank, owning property is the second most protected thing in capitalism in Ireland at least.

Saw this flying by the house yesterday, so we have an extra medevac capability.

Interesting article about teamwork and personalities, it’s always been important but I think that the current all-remote-working situation in the IT industry has made it all the more essential:

But even though teamwork is everywhere, we continue to train people — whether in education or in the workforce — for primarily individual and technical skills. As someone who’s worked with teams for the past 25 years in the corporate world and written two books about teamwork, I think that needs to change. And that’s why I’m going to share with you the three simple virtues that make for a good team player.

The first and by far the most important is humility. If you want to be an ideal team player and if you want to be successful in life, you really need to be humble. Most of us know what humility is — it means not being arrogant or self-centered but putting others ahead of ourselves. It’s such an attractive and powerful thing.

When somebody lacks confidence and makes themselves small, that’s not humility. To deny our talents is actually a violation of humility, just like it is to exaggerate them. The writer C.S. Lewis said it best when he wrote, “Humility isn’t thinking less of ourselves, it’s thinking about ourselves less.” (Editor’s note: That quote has long been misattributed to Lewis.)

The second is equally simple: You have to be hungry. This simply means having a strong work ethic. People who have an innate hunger about getting work done are typically much more successful on teams and in life. This quality is the one that you probably have to develop earliest in life; when I work with people later in life who never developed it, it can be harder for them to build it. Being hungry is not about workaholism, though. Workaholics are people who get their entire identity from their work. People who are hungry just want to go above and beyond what’s expected; they have a high standard for what they do, and they never do just the minimum.

The third attribute is what I call being smart. But it’s not about intellectual smarts; this is about emotional intelligence and having common sense around how we understand people and how we use our words and actions to bring out the best in others. This is so important in the world, and being smart is one of those things that people can work on and get better at.

You need to have all three qualities to be a great team player.